Sorry for the few weeks’ lack of posting – at the beginning of August we went from having very little work to having two straight weeks of it, and we’ve been unable to update.  With the end of Ramadan, Summer Camp Round Two started, and since we had no camp in Azilal, we got to go help out at other volunteers’ camps. We decided to split up – Matt went to help at a camp near our training site, Taounate, and I went to one on a nice beach town on the Atlantic. We both had a great time at our respective camps, but we also each got a reminder that when it comes to planning work here in Morocco, the result rarely matches the plan.

I was scheduled to work at an 8-day-long camp of 40 kids led by some other volunteers. What actually ended up happening was a camp that started a day late and ended a few days early. We had 15 kids the first day, 40 the second, and 15 again the last couple of days.  I’m not complaining by any means – it was a great camp and I’m really glad I went to help out – but it definitely didn’t turn out the way I expected it to. I suppose the whole week was a nice reminder for me that when things don’t go as planned, sometimes it can actually be for the better.

Matt was scheduled to work at his camp for 10 days with another volunteer. His camp also got cut short, but in his case it was because the supervisor was 5 days late in taking them to the camp (partially because of a trip he took to Casablanca, a city 4 hours away, without letting anyone know). After an unexpected overnight detour where they were enlisted to help clean up a different camp that had just ended, they finally made it to their camp and started working on their main activity, which was to organize a soccer tournament for the kids. Despite the fact that many of the games had to be cut short or cancelled because they started over an hour late and daylight ran out, Matt had a good time and he also counted his camp experience as a good one.

The funniest thing to me about our two camps is that in Morocco, the fact that the reality barely met our expectations is basically considered to be normal. Every time the situation at my camp changed our general reaction was “well, of course,” because it’s not work in Morocco if things don’t go differently from how they’re planned. If any other PCV read these stories, they wouldn’t be surprised in the least because stuff like this is so common in all that we do. And it’s not just us Americans resigning ourselves to a cultural point we don’t understand – Matt was visiting our host family a couple days after his camp was supposed to start, and when he told them it had been moved back, their only response was “OK,” no questions asked.

There’s a word in Arabic – “inshallah” – that means “God willing.” It’s a favorite among PVCs because it just captures so perfectly the attitude among Moroccans that what will happen, will happen. You expected 40 kids but you have 15 (or vice versa)? Well, that’s just how it is. Camp got moved back 5 days, partly because your supervisor took an unannounced trip to Casablanca? God willed it, so you’d better adjust. This situation is often amusing, sometimes infuriating, but most of all is a great lesson in flexibility. When it comes to planning work, what actually happens is often far from what we’ve planned – summer camps are just one really good example. But we’re learning to be flexible, and inshallah everything will work out fine. 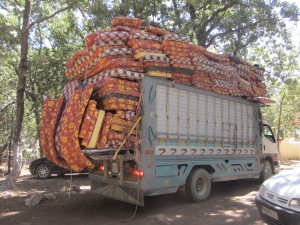 Camp is all packed up… and apparently shoved into this one truck.

Matt had the camera all week, so you only get pictures from his camp 🙂

3 thoughts on “Summer Camp: Or, a lesson in expectations vs. reality”