This video has been making the rounds among Moroccan volunteers lately. It’s a beautiful video that does a great job of showcasing the diversity of what Morocco has to offer, and it has some really gorgeous shots… if you’ve got 5 minutes to spare, I’d definitely recommend it (I feel the need to add a disclaimer that neither I nor Peace Corps are affiliated with the filmmakers in any way – I just think it’s a great video).

Matt and I have done quite a bit of traveling around Morocco (which anyone who reads this blog already knows) and we’ve really enjoyed getting a first-hand look at the beauty of this country. Our most recent trip was to go hiking out in the valley of Ait Bougamez, which is a popular hiking destination a couple of hours from Azilal. That area is also where a lot of health and environment volunteers used to live before their program ended; they lived in lots of tiny, isolated Amazigh villages way up in the mountains. It was really interesting to get a quick glance at what life in those towns is like, and what it would have been like to be a PCV in those areas. This hiking trip is probably the coolest trip we’ve taken so far, and undoubtedly it’s where we saw some of the most amazing scenery we’ve seen here. We’ve posted some pictures to give you a peek – enjoy! 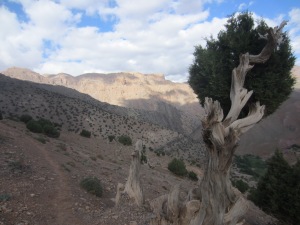 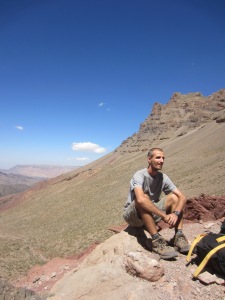 At the beginning of September, Matt and I traveled to a town a few hours south of us called Ouarzazate to attend a 10-day language training workshop. This time we weren’t learning Darija, but instead a language called Tamazight, which is one of the languages of the Amazigh people.

The Amazigh were living in Morocco long before the Arabs came to North Africa, and are considered the indigenous population of Morocco. Upon the arrival of the Arabs, the Amazigh people were pushed farther and farther into the less inhabitable areas of the country, such as the mountains and the desert, and as a result you can still find large pockets of Amazigh peoples living in those areas. Azilal is one such area – almost everyone we’ve met here speaks Tamazight – although as a larger town, most people do also speak Moroccan Arabic.

I really enjoyed this training because, along with the language, we got to learn a bit about the culture and history of the Amazigh, which I found fascinating. I’ll try not to bore you with too many details, but I want to share some of the things I found most interesting.

I’m excited to try out my new language skills here in Azilal. So far we’ve been able to communicate with just Darija, but whenever we meet a new person in town, they never fail to ask us (in Tamazight) “but do you speak Tamazight?” I’m so glad that now, instead of giving them a blank stare, I can say “imik!” (a little!) The Amazigh culture is so interesting, and although the extra language makes things a little difficult sometimes, I’m happy to be in a site where I can experience it a little bit during my time in Morocco.

This is the Amazigh flag with the “free man” symbol 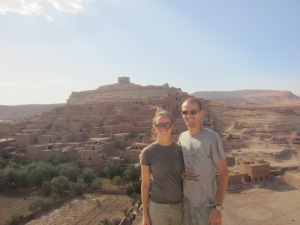 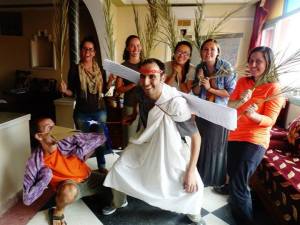 Our Tamazight class (with our teacher front and center) after we performed an Amazigh kids’ song for our end-of-training talent show. Matt was a little bird that fell from a tree (that’s us) and broke his leg, but was then saved by an angel.

College football started last weekend. It still feels like the middle of summer here – it’s certainly hot enough and school hasn’t started yet – so the season kind of snuck up on me. Last Saturday, we were lucky enough to be able to stream the first Ohio State game of the season and watch most of it live (who thought we’d be able to do that in Peace Corps!) and it was a great way to feel like we were back home for a couple hours.

But this morning, before the sun was too high, there was a cool breeze coming in the window and it felt so much like a fall tailgate outside Ohio Stadium that I was stuck daydreaming all morning about hot dogs, beer, scarlet and grey as far as the eye can see, beer, the roar of the crowd in the ‘Shoe, beer, and Carmen Ohio. This week’s game is a little bit harder to miss than last week’s, because it’s the Alumni game, which means if we were home we’d be marching along with 600 other alumni “just one more time” in Ohio Stadium… and I wish I could be there with my friends.

Being out of Ohio for the football season is hitting me a little bit harder than I expected it to. Maybe this sounds a little silly to you if you’re not a sports fan, but I’m starting to realize how much Ohio State football means to me. It’s not about winning (well… it’s not all about winning), but also about how it makes me feel like I belong; like I’m at home. I wasn’t a big football fan until I joined the OSU marching band, but I definitely grew up with a deep-seated hatred of maize and blue. Football Saturdays bring back memories of my whole family decked out in scarlet and grey, my dad and my brother glued to the TV, my grandparents bringing us recorded videotapes of the close games so we could re-watch them, me playing really terrible middle-school versions of “Hang on Sloopy” on my trumpet, cookouts at neighbors’ and friends’ houses, and afterwards hearing the games endlessly analyzed by my extended family.

OSU wasn’t my original choice for college, but once I enrolled and joined the band it was all over – I’m a fan for life now. I have so many great memories from my time there, not to mention it’s where I met my husband and tons of good friends. OSU, and especially the football season, is one of the biggest things that consistently reminds me of home. Perhaps the hardest thing about being gone for this season is knowing that I’ll also be out of the country for next season, and who knows if I’ll ever be back in Ohio for a full season again. All I can say is, HAMDULILAH for wifi which means that even though we can’t actually be home, Matt and I can get a taste of it for a couple hours each weekend.

To all our alumni band friends: have an extra great time today for us!

To everyone else: O-H!