Last week the Muslim world celebrated 3id al-Adha, which is the holiday of the sacrifice. It marks the end of the Hajj pilgrimage to Mecca and is a celebration of the story of Abraham and Issac (although in the Qur’an it’s Ibrahim and his other son, Ismail). In Morocco, the holiday is more commonly known as 3id l-kbir, or “the big holiday”, which we enjoyed celebrating last week with our host family – it was an awesome cultural experience! But be warned – some of our pictures (included below) are a little gruesome.

This holiday is famous (or perhaps infamous?) among PCVs because every Moroccan family buys a live sheep that they take home to slaughter the morning of l-3id. In the days leading up to l-3id, we watched nervously as we saw people walking sheep home from market, pushing goats in a cart, or driving by in a pickup truck with multiple sheep in the bed. We saw plenty of big knife-sharpening wheels in action, and multiple times heard the question “so have you bought a sheep yet?” 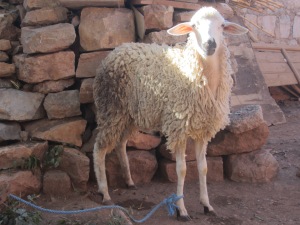 No, we’re not getting a sheep, because we’re going to help eat this one.

On the day of the holiday, we woke up to an extended prayer service happening at the nearby mosque. As the service ended, we headed out to join the crowd of people heading home to begin the slaughtering. With all the shops closed and greetings being exchanged everywhere, it felt a lot like Christmas (later one of our friends would again compare l-3id to Christmas: “they’re so similar! It’s just that you cut a tree, and we cut a sheep!”). Once we met up with our host family, we went around to the neighbors’ houses exchanging holiday greetings and getting fed lots of cookies and tea (yes, at 10:00 in the morning).

Then finally the butcher made his way to my host family’s house, and we all gathered around to watch him slaughter the sheep. I sympathized with our little 5-year-old host niece who hid the whole time, but I figured since this is something I’ll only see a couple times I needed to stay (and I took a short video for you all, included below!) It turned out to be pretty gross, but also pretty quick… and then we got to the cool part, which included watching the men skin the sheep and take out all the organs and whatnot. Fun fact: to clean out the intestines, the best way is apparently to pour water down the butt and then blow it through until there is no poop left (unfortunately we have no pictures of this). For whatever reason, this seems to be a coveted job… and I tried really hard to avoid eating any intestines. 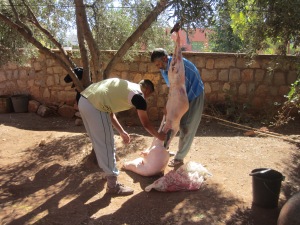 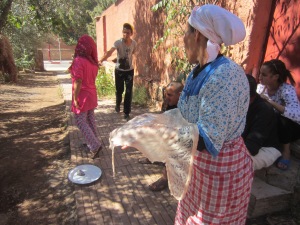 drying out some fat…

aaaand little do we know, but that’ll be tonight’s dinner.

After the sheep was all clean and the slaughter was over, the rest of the day (and the next few as well) was spent cooking and eating various parts of the sheep. The traditional first meal of l-3id is grilled fat-wrapped liver (or heart, or pancreas/mystery organ), which is surprisingly delicious. For dinner, we had the grilled head, including eyeballs and tongue (but no brain, as far as we could tell)… which was decent, but I wouldn’t say delicious. Over the next few days we got lots of invitations to come eat meals which consisted entirely of huge plates of various cuts of meat, and enjoyed the continuing holiday feel by visiting with lots of families. But by Monday everything was back to normal – all the kids went back to school and the stores opened up again, and we’ll be starting work again soon at the Dar Chebab. As much fun as it was to experience l-3id with Moroccan families, it’ll be nice to get back to a normal schedule after a summer full of traveling. But for now, a late mbruk l-3id (happy holiday) to you all! 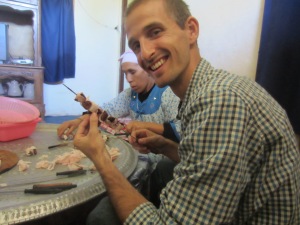 If you’re really desperate to experience the holiday the way we did, here’s the video I took of the slaughter. Be warned, it’s graphic. If you make it through the whole thing you’ll hear my laugh of disgust and my host mom asking me “did you take a picture? can I see?”